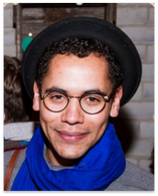 Jared Field, is a member of the Gomeroi clan of the Kamilaroi Nation, undertaking a DPhil in Mathematical Biology at Balliol College, Oxford.  Jared graduated from the University of Sydney in 2014 with First Class Honours in Advanced Mathematics.  He received the University of Sydney Indigenous Progress Award in 2012 and 2013 and was a participant on the Aurora Indigenous Scholars International Study Tour in 2014.

​Jared is a 2015 Charlie Perkins Scholar.