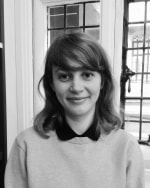 Jessyca Hutchens is a descendant of the Palyku people of Western Australia, and currently lives in Sydney, New South Wales.  Jessyca graduated with a DPhil in Fine Arts at the Ruskin School of Art, Balliol College, Oxford in 2018.

She graduated from the University of Western Australia with a Bachelor of Laws/Bachelor of Arts in 2010, obtaining her Bachelor of Laws with Distinction, and her Bachelor of Arts with First Class Honours in Fine Art History.  Jessyca achieved a Distinction average in her degrees.  Some of her notable achievements include being awarded the UWA Graduates Association Prize in Fine Arts in 2005, the Hackett Foundation Alumni Honours Scholarship in 2008 and the Dr Dorothy W & Dr Robert Collins Prize for Indigenous Law Students in 2010.  Between 2010 and 2013, Jessyca lived in Berlin, Germany.  While there, she worked as an Archival Assistant at the photography gallery, Kicken Berlin, and as an editor for the contemporary art website, Berlin Art Link.  She also previously worked as a sessional tutor at the University of Western Australia and as a Compliance Officer at Yamatji Marlpa Aboriginal Corporation in Perth.  Jessyca is currently working as the Assistant to the Artistic Director of the Biennale of Sydney.